Avoid All Evil, Do Good, Purify the Mind with Santussika Bhikkhuni

An event every month that begins at 7:30 pm on day Second of the month, repeating until September 13, 2022 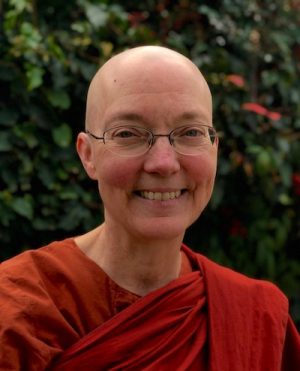 Please register to receive Zoom link and other information about this course.

In this 3-session course, we will delve into how to live by this teaching of all the Buddhas (Dhammapada 183). Using passages from the Pali suttas as our basis for discussion and practice, we will explore questions drawn from life experience. Each session will include instruction, meditation and discussion. Depending on the number of attendees, we might include short break-out sessions in small groups.

Ayya Santussika is a Theravada bhikkhuni who is trained and practicing in the Thai Forest tradition. Her faith in the Dhamma developed during many visits to monasteries of Ajahn Chah and his disciples in Thailand, America, England, New Zealand and Australia beginning in 1998. She has been training as a nun since 2005 in large and small monasteries in both England and America. In 2012, she received full ordination as a bhikkhuni and founded Karuna Buddhist Vihara, where she currently lives, located in the Santa Cruz Mountains near Boulder Creek, California. Her Dhamma teachings are primarily based on the Pali suttas.