“Seeing with the Eye of Dhamma”: Teachings of Buddhadasa Bhikkhu with Santikaro 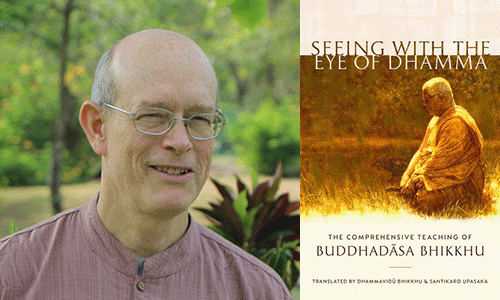 Register to receive the Zoom link and updates about this event.

Santikaro will discuss his most recent translation of Buddhadasa Bhikkhu’s book, “Seeing with the Eye of the Dhamma”. Originally envisioned by Buddhadasa as a “Little Book of Dhamma” as he felt it contained the essence of the the entire Pali canon, it is a very detailed and not very “little” book.  Beginning with an extensive discussion of spiritual practice and moving into specific teachings on Dhamma, this book will be an indispensable resource for readers interested in a profoundly committed contemporary approach to the Buddhist path.

Santikaro studied with Ajahn Buddhadasa during the last nine years of his life, became his primary translator, and continues to share this “naturalist” approach to Buddha-Dhamma. Ordained as a Theravada Bhikkhu in 1985, Santikaro spent most of his monastic life at Suan Mokkh (southern Thailand). During this time he led Dawn Kiam, a small monastic community for foreigners and was active among socially engaged Buddhists in Asia. He returned to the USA in 2000 and left monastic life in 2004 to found Kevala Retreat (then Liberation Park). His understanding of life has been enhanced by the Enneagram, feminism, cancer recovery, and trauma healing. He continues to teach nationally and internationally, and to translate the work of his teacher. He teaches Buddhism and meditation with an emphasis on the early Pali sources. He has led meditation retreats for more than thirty-five years, with a special fondness for mindfulness with breathing.

Buddhadasa Bhikkhu (1906–1993) was the most innovative and influential Thai teacher of the twentieth century, throughout which he observed, critiqued, and responded to the changes of modernity. A devoted student of the Pali suttas, he was deeply interested in the science of awakening and dedicated his life to reacquainting humanity with the path that centers nibbana—the end of suffering—in each day of our lives. His practice center in Thailand, the Garden of the Power of Liberation, provides a natural setting for practice and is full of skillful means for introducing fellow travelers to the “Heart of Buddhism.”

Want to be informed of upcoming Sati Center events? Sign up for our newsletter.

This Sati Center event is offered freely and everyone is welcome. Donations are used to make offerings to the teachers and to pay the expenses of the classes and programs.